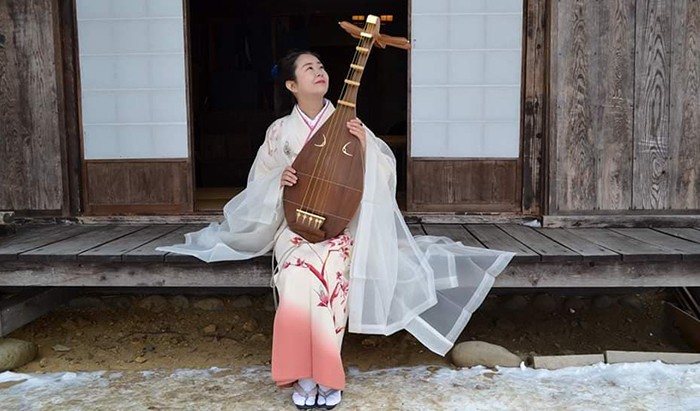 In this fourth program of the series of solo concerts named Music in the Castle (Música no Castelo), organized by the Japan Foundation, we will present the Biwa, with the musician Akiko Sakurai, interpreter of this instrument.

The Biwa is a stringed instrument, shaped very similarly to the European lute. Within Shintoism, it is the instrument chosen by Benten, goddess of music, eloquence, poetry, and education, but the origin of this instrument is not Japan.

The Biwa comes from a Chinese lute called Pipa, which in turn was influenced by a Middle Eastern Persian instrument called the Barbat. In Japan, the Biwa arrived from China during the Nara period (A.D. 710-759), and it was during this period that the Gagaku court orchestra entered Japan. 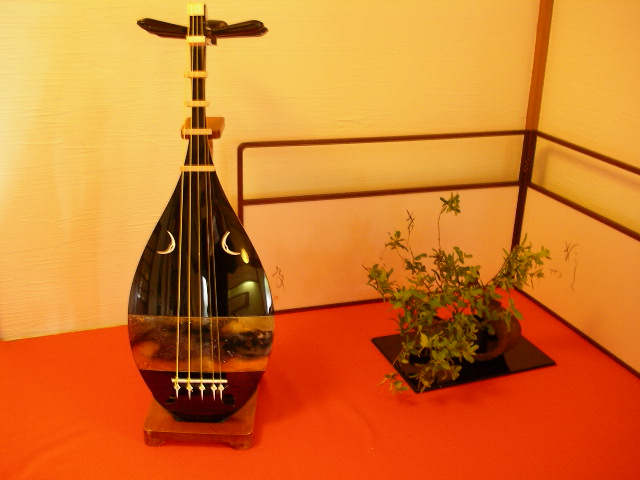 However, despite its popularity, during the Ōnin War, a civil war that lasted from 1467 to 1477, the subsequent period of war between the fiefdoms interrupted the teaching of the Biwa and decreased further with the end of Todo, a divination method created by Yokohama Marumitsu, a great defender of the Biwa music. In the Meiji period, Biwa players lost their patronage. 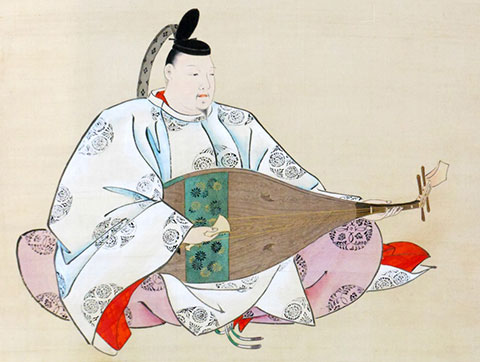 Furthermore, the reforms arising from the Meiji Restoration (1868-1912) led to the massive and rapid industrialization and modernization of Japan, which shaped its development inspired by Europe and the United States, praising the Western culture; consequently, traditional arts were considered to be outdated, and the Biwa did not escape this saga. However, when the citizens of the city of Edo, familiar only with the music of Shamisen, had contact with Satsuma Biwa, brought by the samurai of Satsuma, it provided a sudden interest in the instrument.

Biwa’s reproduction and manufacturing almost died out during the Meiji Period, when Western music and its instruments became popular. At the end of 1940, the Biwa, already a Japanese tradition, was almost completely abandoned, as a result of the introduction of Western instruments and also due to the fact that the songs of Biwa, mostly, war stories, where the aesthetics of destruction, were banned during World War II, where victory over the enemy was unconditional.

However, thanks to the collaborative efforts of Japanese musicians, interest in Biwa is being revived. Both Japanese and foreign musicians have started to embrace traditional Japanese instruments, particularly the Biwa, and their compositions. While blind Biwa singers, who had a consolidated tradition, were also not excluded, many artists began to use the instrument in traditional and contemporary ways. 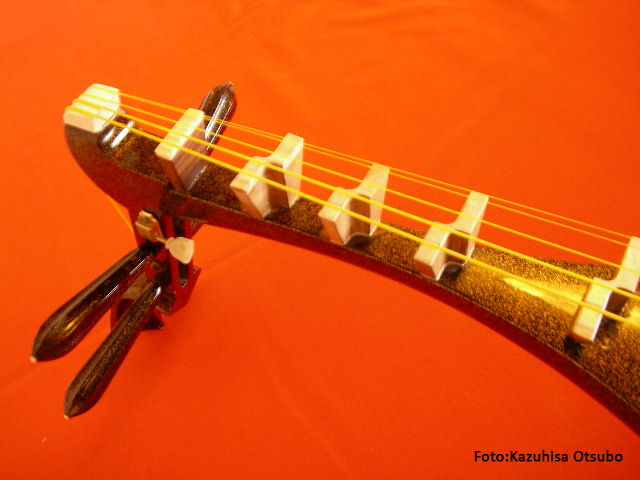 Nowadays, we still have some rare period instruments that served as a model in order for the Biwa to be made in Japan. Preserved since the Nara period, similar instruments are manufactured in small numbers until today.

There are two types of music from Biwa. The first is played in group, at Gagaku court orchestra. And the second is played and recited on solo, like the troubadour, the latter is based on a pentatonic scale (a five-tone scale or five notes), which means that each octave has five notes. This scale sometimes includes supplementary notes, but the core remains pentatonic. The rhythm in Biwa

songs and narratives allows broad pulse flexibility (rhythmic tempo). The songs don’t have a defined tempo, although in contemporary compositions the definite rhythm becomes present. The notes played on the Biwa generally start slow and smooth and progress through gradual accelerations, increasing and decreasing rhythm during the entire performance. The Biwa’s texture combined with singing are often compared to minimalist aesthetics. 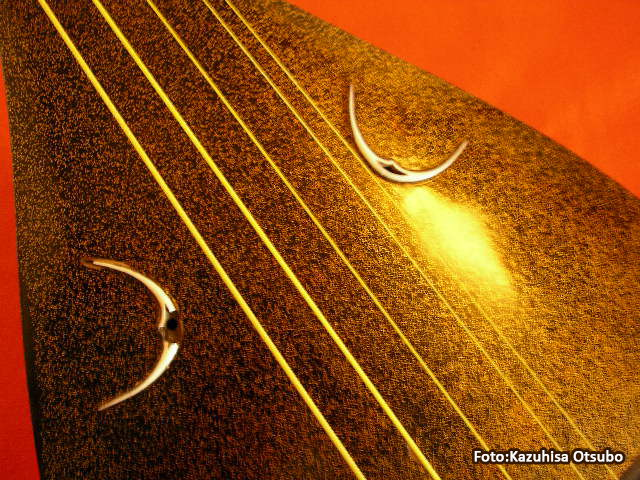 There are seven types of Biwa:

• Gaku Biwa
A large and heavy instrument with four strings and four frets. Its plectrum is small and thin, often of round shape, and made of solid materials. It was played in group and is played laterally, like a guitar, and in a sitting position.

• Gogen Biwa
This is a Biwa with the thinnest body, which was removed from court orchestras during the 10th century, as well as from Chinese orchestras. Not to be confused with the five-string variants.

• Moso Biwa
Also with a narrower body, its plectrum varies in size and material. It was widely used by monks in Buddhist mantras. Due to its small size, it was favorable to be carried on its spiritual journeys.

• Heike Biwa
Derived from Gaku Biwa, its construction is practically the same as Gaku Biwa, however preference is given to the smaller size. On the other hand the plectrum is bigger and the opening of its end wider. The entire volume of Heike Monogatari is recited through singing, with an influence on the Buddhist mantra.

• Satsuma Biwa
It’s the four-string Biwa used by the samurai for spiritual encouragement. The plectrum is much larger and allows for percussive techniques by striking it on the body of the instrument.This size made it possible to use it in place of Katana, for self-defense during the Sengoku period. The body is made of hardwood, such as the Japanese mulberry, though the construction process, depending on the maturation of the wood, would last for years: 10 years after the wood was cut, and from then the craft process would start. The strings is made of silk.

• Chikuzen Biwa
There were two models, with four strings and four frets or five strings and five frets. Popularized during the Meiji Period by Tachibana Satosada, most contemporary artists use the 5-string version. The plectrum is smaller than that of other models and its weight will depend on it being played by a man or a woman. Men also played wider instruments. The tunings varied according to the singers’ songs and vocal range.

• Nishiki Biwa
This is the Biwa perfected, with five strings and five frets, popularized by Kinjo Suito. Its plectrum is the same as that used in the Satsuma Biwa. Kinshi Tsuruta was a great player, who developed his own style using the 5-string Biwa. 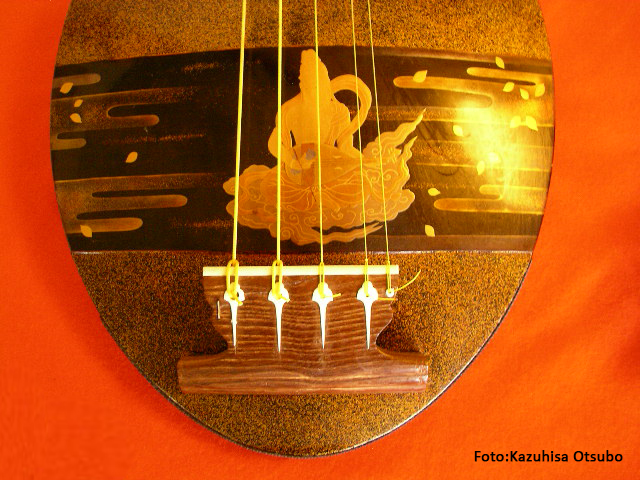 With the modern Biwa, several attempts have been made to compose not only songs of classical style, but also new songs, solos and in sets. Some songs are composed according to the classical style, but the Satsuma Biwa has a great percussive effect and is often played in modern music.

For instance, November Steps and Eclipse, by the great composer Toru Takemitsu (1930-1996), are widely known.

The Biwa is no doubt one of the most important instruments in Japanese classical music and history. Since arriving in Japan, in the Nara period, its universe has adapted to several historical moments and different musical styles.

It is often said that the largest freshwater lake in Japan, Lake Biwa (Biwa-ko), located within Shiga Prefecture, on the island of Honshu (main island), was so named due to its shape, similar to the Biwa instrument. We also often see ceramics that represent this instrument. 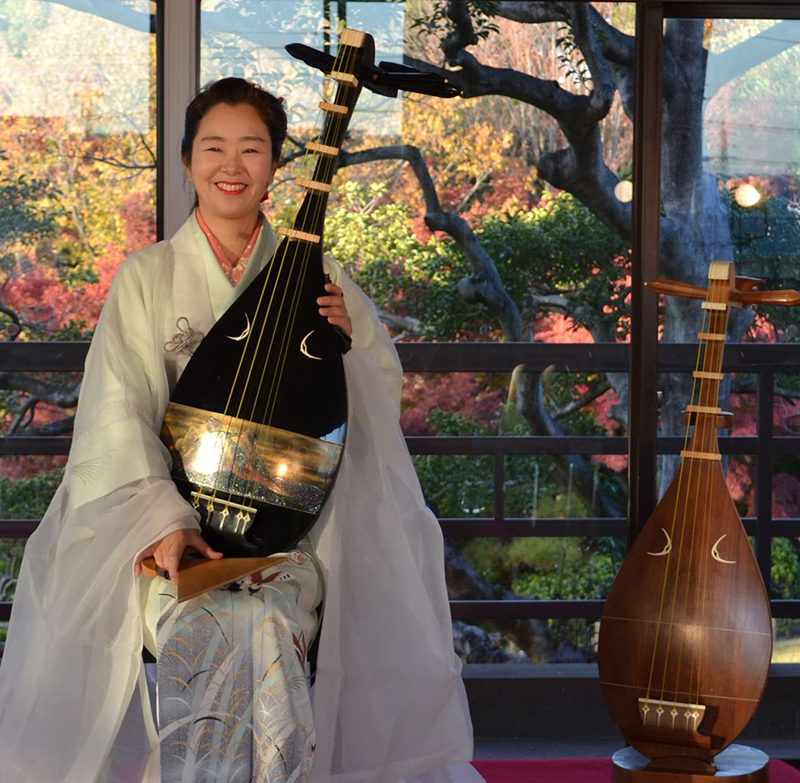 Musician, interpreter of the Biwa and professor at the Satsuma Biwa Diffusion Association, Akiko Sakurai studied the Satsuma Biwa with Yukio Tanaka, while attending the Tokyo College of Music.

As one of the representatives of traditional Japanese music, she has performed in several countries, such as Hungary, Canada, United States including Hawaii, China, South Korea, Indonesia, Hong Kong, El Salvador, England, Italy, Switzerland, Albania, France, Spain and Tunisia.

In the United States, she participated in the APAP Festival in New York, in 2011 and 2012, presented the “Miminashi Hoichi” project, at the Metropolitan Museum, has held a workshop at The Juilliard School, and performed at the University of Massachusetts, Boston.

She has also toured 40 cities in Japan, performing with Kei Ogura, a singer, and songwriter.

She has actively worked in collaboration with other artists, such as Kiyoshi Hikawa, Ayako Fuji, Sayuri Ishikawa, Hashinosuke Nakamura, Mitsuyo Asaka, and GACKT, and has been on educational programs on TV networks, the radio, and schools across the country.

Throughout her career, she has earned major achievements, such as the Top Prize in the Biwa Music Competition in Japan, the Ministry of Education, Culture, Sports, Science and Technology of Japan Award, and the President NHK Award.

She came to Brazil for the first time in 2015, as an official promoter of traditional Japanese culture, performing in various Brazilian cities.

In 2018, on the 110th Anniversary of the Japanese immigration in Brazil, she played the important work of Toru Takemitsu, November Steps, an original composition for the Shakuhachi, Biwa and Orchestra, at the Municipal Theater of São Paulo. It was the first presentation of this modern composition using the Biwa and Shakuhachi in Latin America. At the time, Shen Kyomei Ribeiro played the Shakuhachi.

In the solo concert of this program, Akiko will perform a historical narrative, “Heike Monogatari” in the storytelling style, the classic way of playing and presenting the Biwa.

The sound of the Gion Shōja bell echoes the impermanence of all things
(Gion Shoja’s bells chimes, just as people stop behaving as usual.)

The color of the Sāla flowers reveals the truth that the prosperous must decline.
(When Buddha left, even the most prosperous elements, such as Sara Soju’s flowers, wilted due to grief)

The proud do not endure.
(The same applies to the proud and arrogant, who will eventually lose their power)

They are like a dream on a spring night
(The alternation between good and evil is not ephemeral like a spring night’s dream, but also an illusion)

Genji, led by Yoshitsune, had more than 3,000 ships.
Against it was Heike –commanded by Kyushu’s best archer, Yamaga Hyoutouji Hideto, with 500 ships, followed by Matsuura’s naval fleet, with 300 ships and 200 members of the Heike nobility at the rearguard position – challenging the battle with more than 1,000 vessels.

Unbelievably, the battle drags on into the afternoon and Genji advances on Heike, favored by the sudden change in the tide. With this advance, it seems that today’s battle would be the last, and then Kiyomori’s first and second wife hug the emperor. “You are the owner of this nation, but your luck has run out.

Let us have Saiho Jodou save us.
Now, please recite the prayer.

There will certainly be a city under the waves.” And then they plunge into the depths of the waters, from the bow of the ship, together with the Emperor, after saying these words:

How ephemeral and pathetic are the winds that blow in the spring
Warships without destination
How sad are their image, drifting away.

Watch Akiko Sakurai’s performance in the Music in the Castle project.