The Japan Foundation promotes Music in the Castle, a solo concert series with Brazilian and Japanese musicians 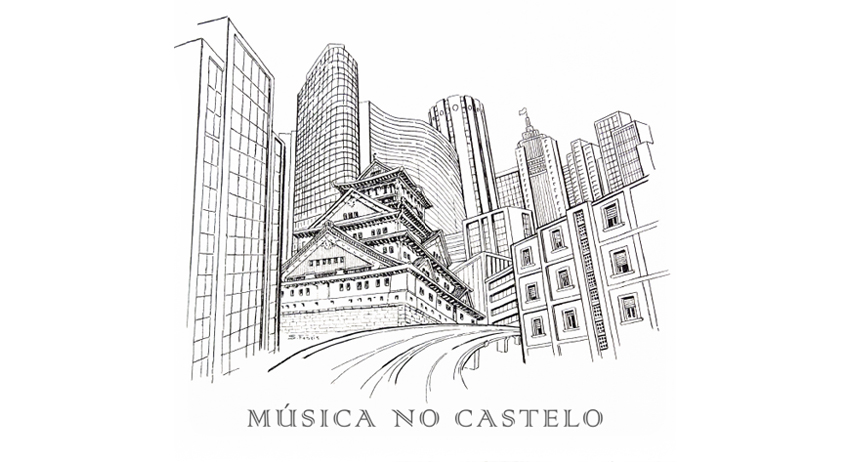 The performances will take place directly from the musicians’ homes, streamed on our YouTube channel, focusing on traditional Japanese instruments

August 15th, the Japan Foundation presents Music in the Castle (Música no Castelo), part of a celebration of Japanese culture in the times of social isolation. The series features ten solo concerts by musicians from Brazil and Japan, all recorded in the musicians’ homes. The performances will be available on the 15th and 20th of every month, starting at 5 pm, on the Japan Foundation of São Paulo’s YouTube channel so viewers can enjoy them safely, from home.

A description of each program will be available on the Japan Foundation’s website with information about the musicians, the repertoire, and instruments, as well as detailed information on traditional Japanese instruments, so that enthusiasts can learn a little more about Japanese music and culture.

Directed and curated by Shen Ribeiro with the support of Sinos na Floresta, the Music in the Castle program gives musicians creative freedom and encourages them to make music that will reverberate through the ether.

During the quarantine, with social isolation guidelines forcing people to stay at home, our homes have become our castles, “fortified” against the frightening enemy outside, explains the curator and organizer of the Music in the Castle program.

The Music in the Castle project was born out of this new reality in which musicians are at home, protected from this invisible, dangerous, lethal enemy, and can express themselves through their art, using the web as a means of communication with the outside world.

“We hope that this channel of communication can bring people a message of peace and hope for a changing world, one that will certainly be better once this storm passes,” he says.

“It will be a symbolic liberation of the Zen spirit of seclusion and meditation, with solo works by the musicians in their own castles, playing their instruments,” explains the program’s curator, Shen Ribeiro, a musician himself.

The Zen aspect of “Music in the Castle”

According to Shen, in the original religion of Japan, Shintoism, God is present in the elements of nature, and shrines are true spiritual oases where the most important dates of the year are celebrated. Buddhism, which was introduced in Japan in the middle of the 7th century, brought not only a new religion, but a new lifestyle which coexists peacefully with Shintoism.

“One of the features of Zen Buddhism is the daily practice of meditation. In Japan, the samurai class engaged in exhausting sword practice every day in their search for perfection. Other arts followed the same path, such as ikebana, the tea ceremony, martial arts, landscaping, and the work of artisans. So why not the practice of an instrument?”

In the morning before getting dressed, light some incense and meditate. Eat at regular intervals and go to bed at a regular time. Always eat in moderation and never until you are full. Welcome your guests with the same attitude you have when you are alone. When alone, keep the same attitude you have with guests. Pay attention to what you say and whatever you say, mean it. When an opportunity arises, don’t let it pass, but always think twice before taking action. Don’t be disturbed by the past. Look to the future. Your attitude should be that of a fearless hero, while your heart should be that of a child: full of love. When retiring at the end of the day, sleep as if it were your last sleep. Upon waking, leave your bed immediately, as if you were leaving behind an old pair of shoes. 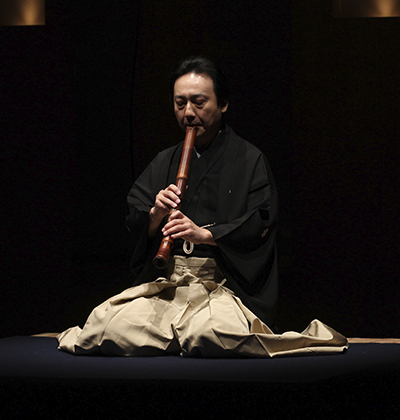 Shakuhachi player and master Jumei Tokumaru was a direct disciple of the great master of the Chikumeisha school and the national treasure Goro Yamaguchi. Through this unique experience, he inherited a way of playing that is very close to his master’s. Today, he is one of the main masters and performers of the kinko style in Japan. His participation will give viewers a sense of the best of honkyoku, the original song for the shakuhachi. [Learn more…] 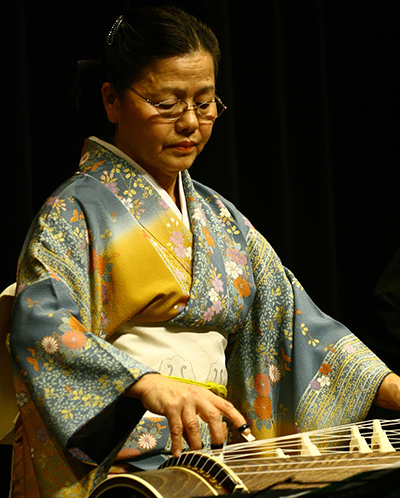 Tamie Kitahara is a Japanese-Brazilian musician living in São Paulo, who promotes the Seiha de koto school. She develops an important job teaching koto and shamisen to both Nikkei and Brazilians. In this project, she will show some of the traditional universe of her line of teaching. [Learn more…]

Gabriel Levy carries on a family musical tradition which started at Casa Levy, a piano shop founded in 1860 in São Paulo, and owned by his family. He followed in the footsteps of his great uncle, Alexandre Levy, a renowned Brazilian pianist and composer. His works includes Japanese music, arrangements and soundtracks featuring traditional Japanese instruments. [Learn more…] 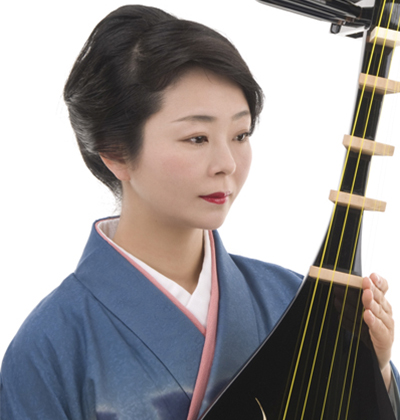 Akiko Sakurai performs with her biwa in the four corners of Japan and around the world, including Brazil. She organized the first performance in Latin America of the composition November Steps by Toru Takemitsu, at the Municipal Theater in São Paulo. Biwa, originally played in the Japanese Imperial Court, is now known worldwide thanks to performances like these. [Learn more…] 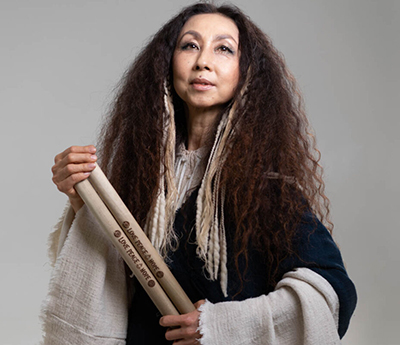 Kaoly Asano, one of the musicians in the Gocoo Group, promotes the taiko outside Japan. It will be a great challenge for Asano to share the unique language of her approach to this typical Japanese drum when playing at home. [Learn more…] 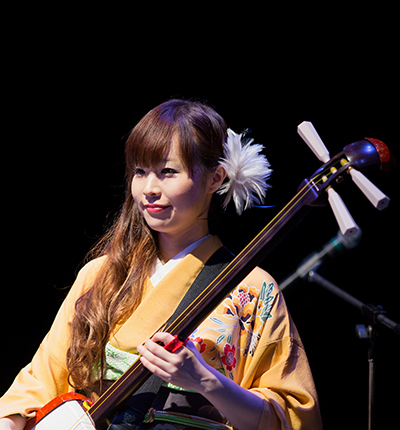 Chie Hanawa‘s technique and musical expression are impressive. She traveled to Brazil in 2015 at the invitation of the Japan Foundation. In her performance, she will show that the shamisen, a traditional Japanese instrument, can be mastered by a young composer. [Learn more…] 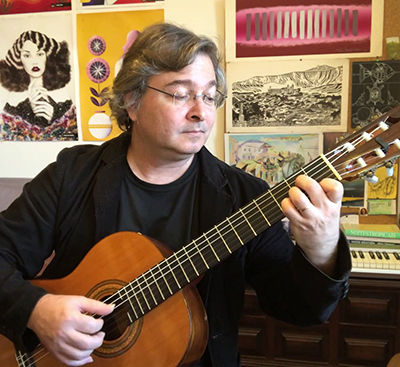 Camilo Carrara‘s CD Canção do Sol Nascente (Song of the Rising Sun) gives his Brazilian audience a sense of the important transformation of the Japanese society during the Meiji period, when European culture took root in Japan. [Learn more…] 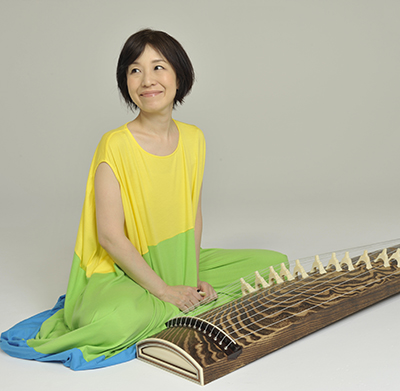 The city of Wakayama has been a reference in controlling the pandemic caused by the novel coronavirus in Japan. It is Yoko Nishi‘s hometown, where her studio is located, and where she teaches koto. She loves the tropical climate and often teaches classes in Brazil, where she has been sharing new techniques, repertoires, and ways to play this instrument. [Learn more…] 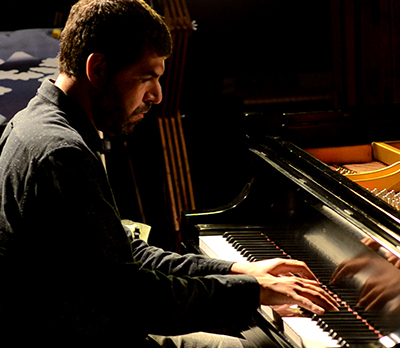 André Mehmari is one of the top musicians in Brazil, and has a deep respect for Japanese culture. Among the concerts and master classes he has given in Japan, particularly impressive is his arrangement of the song Canto de Xango, by Baden Powell, which he played at the closing ceremony of the Olympic Games in Rio de Janeiro. Through the sounds of shakuhachi, koto, guitar, and an orchestra, Mehmari unites the Brazilian melody with a Japanese feeling.  [Learn more…] 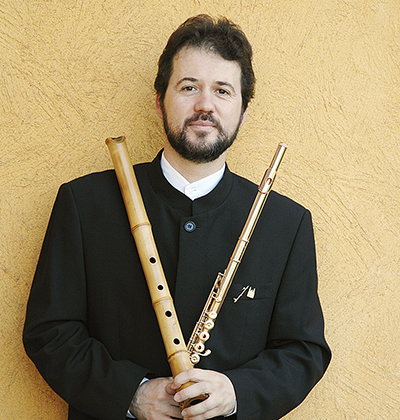 Shen Kyomei Ribeiro, a direct disciple of master Goro Yamaguchi, has been working in partnership with the Japan Foundation for many years, always on in-person projects. Now, with this innovative event, he hopes to convey the idea that we can live and enjoy life in our own spaces, despite social isolation. [Learn more…]

Produced by
The Japan Foundation in São Paulo