In this seventh program of the solo concerts of the “Music in the Castle” series, we will present the guitar with the musician, guitarist and music producer Camilo Carrara, interpreting songs from his renowned work “Canções do Sol Nascente” (Songs of the Rising Sun). 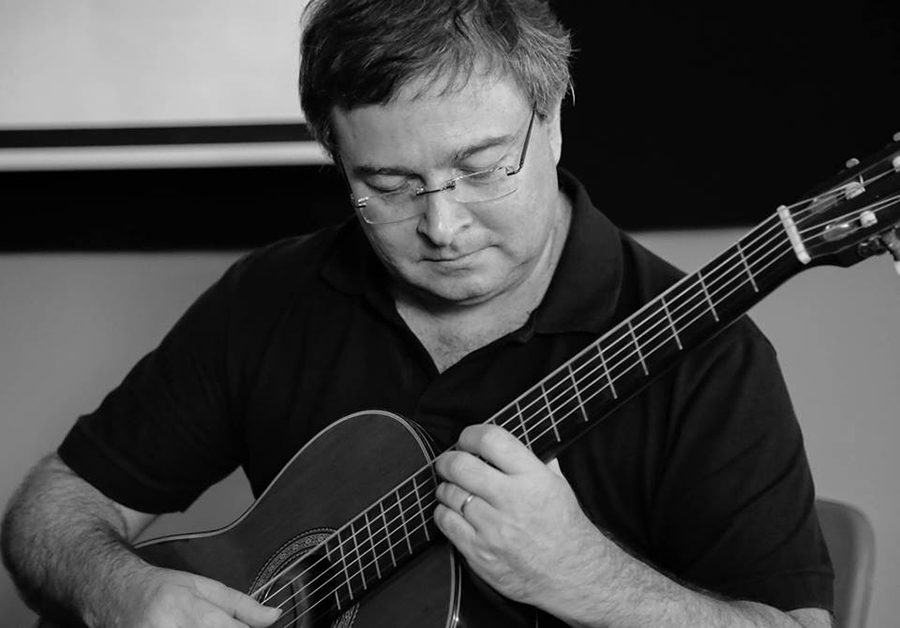 The guitar is a string instrument with a box, usually made of wood, which generates acoustics that facilitates the propagation of sound. In some Spanish-speaking countries, it is known as the Spanish guitar.

The history of the guitar takes us back to approximately 2,000 B.C. It underwent a major transformation until it became the instrument we know today. Records of the ancestor of the guitar were found in Greece, consisting of a turtle shell closed with ox leather, with strings made of stretched sheep intestines. This is the most remote record of the guitar.

Originating from the Arab lute, it was introduced to the Iberian Peninsula by the Muslims, adapting very well to the court’s activities. There is also the hypothesis that attributes its origin to the Roman zither, which then expanded with the domination of the Roman Empire.

Another relative is the vihuela de mano or vihuela, an Iberian string instrument similar to the Renaissance lute, though not an ancestor of the guitar (guitar), with which it coexisted, although they share a similar format. 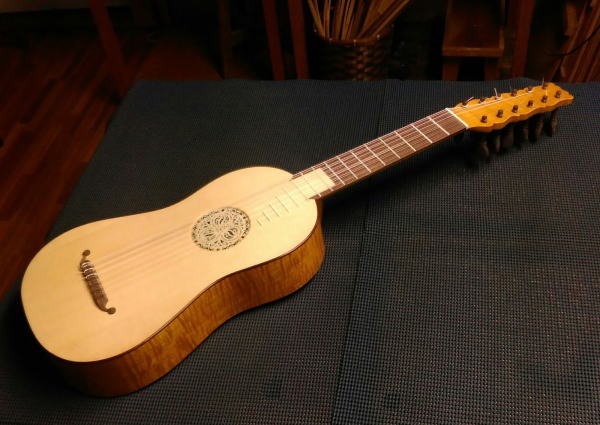 By the end of the 16th century, the vihuela fell into disuse and the baroque five-string guitar became popular, with frequent changes being made to it in order to adapt it to new requirements. This may have influenced the fact that very few original vihuelas have been preserved.

The first news about this instrument in Brazil dates back to the 17th century, in São Paulo. The confusion between the Brazilian viola and the guitar starts in the middle of the 19th century, when this viola is tuned the same as the guitar, that is, the notes A, D, G, B, E.

Within this context of colonization we have the introduction of the Brazilian viola (an instrument with 10 or 5 double strings), brought by the Portuguese to Brazil. For some time, there was still confusion regarding the terms viola/guitar in the country. Today, however, the discrepancy between these two instruments is significant. 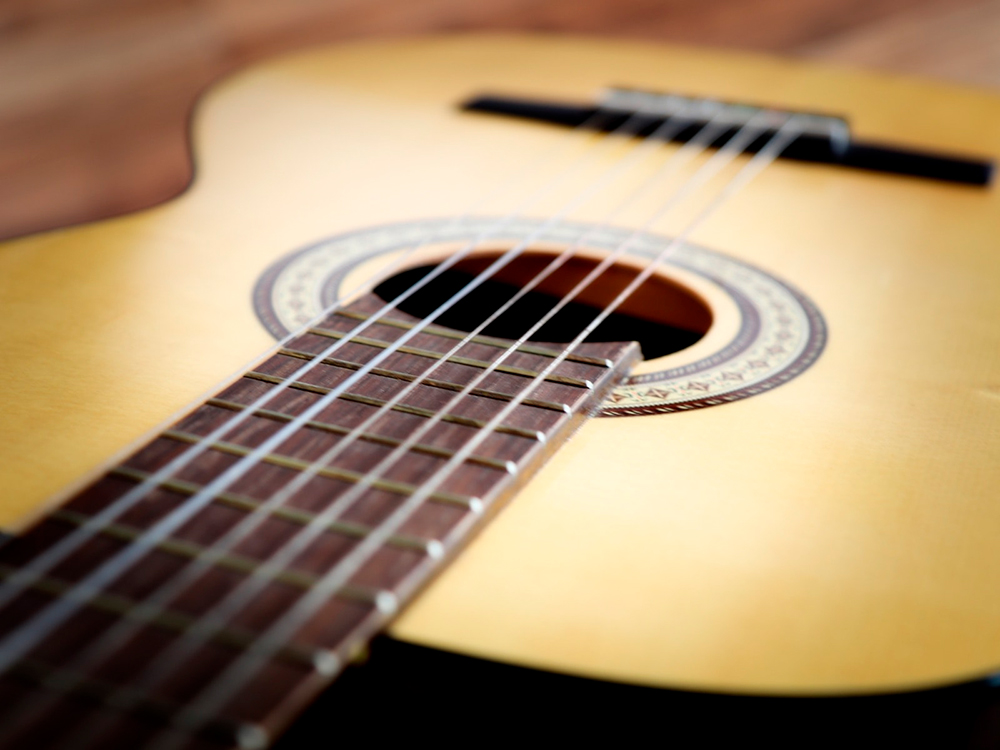 The use of the guitar is one of the most diverse, which can be used both in instrumental music (orchestras), and to accompany voice (solo songs). During a period in history, the guitar had a bad reputation, as it was the preferred instrument of bohemians and serenaders. The title of “marginal instrument”, “instrument for bums”, however, is no longer used.

The Brazilian music for guitar is based on the small work of Heitor Villa-Lobos, a major national guitarist. The musician is the author, among other works, of ‘Twelve Études for Guitar’, with his  life having been adapted for the cinema (Villa-Lobos – Uma Vida de Paixão [Villa-Lobos – A Life of Passion]  2000).

The country has cultivated its own group of guitarists, including, among them, Clementino Lisboa, who started his guitar public performances introducing the instrument to the elite of the city of Rio de Janeiro; Joaquim Santos, founder of ‘O Guitar’ magazine; Aníbal Sardinha, precursor to the bossa nova; Jorge do Fusa; Américo Jacomino; Nicanor Teixeira; among others. In Japan, the guitar has become a very popular instrument, widely used in both classical and popular Japanese music. It is worth noting the beautiful luthier work developed by the Japanese, with big names in the world music scene today.

Music director and producer, guitarist, multi-instrumentalist, arranger, composer, teacher, and sound branding consultant. B.A. from the Music Department at ECA-USP and specialist in Strategic Marketing Management, with an MBA from FEA-USP. Guitar teacher at the Nacional Music Festival, in Maryland (United States) and at the Music Department of Faculdade Cantareira, in São Paulo. Carrara’s discography is made up of more than 80 CDs, including collaborations and solo works. 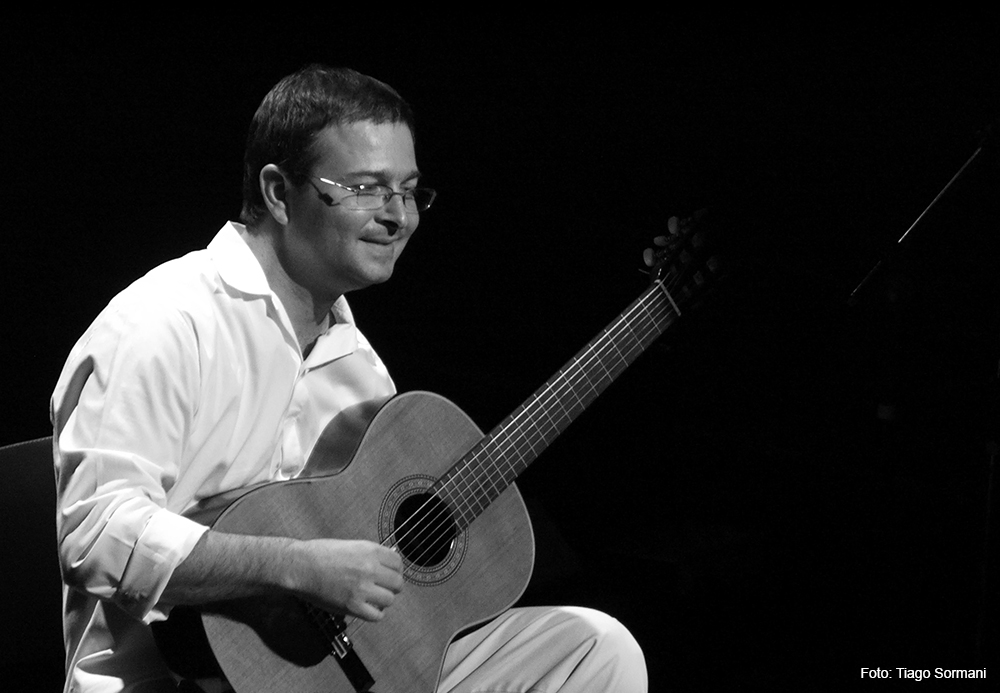 The idea of recording a CD with Japanese music emerged in January 2002, in Poços de Caldas-MG. I had been invited by my friend Fábio Zanon to work as his assistant at the III Festival Música nas Montanha (Music in the Mountains Festival). During the festival, I first heard an arrangement of a Japanese song composed for guitar solo. It was an arrangement of “Sakura”, a traditional song composed in the late 19th  century. I was really impressed – the atmosphere created by the union of that melody with the guitar sound attracted me. For a long time, could not get that sound out of my mind.

Back in São Paulo, I searched the city for Japanese music scores and didn’t find much. After much research, I received a gift from my friend Akira Joko, a collection of songs brought directly from Japan. The book, entirely written in Japanese, featured 189 melodies and their musical notations. On the same day, I started reading the melodies of the album, one by one, selecting those that touched me the most. After a few months, I decided to test myself: I made an appointment at the studio and recorded, impromptu, several of the chosen songs. At that time, I had been researching a type of alternative tuning for one of my guitars. I had mixed steel and nylon strings and tuned the instrument two tones below the usual tuning. The solution surprised me and I took the opportunity to apply this in the recordings.

For the recording, I have selected 24 melodies among children’s songs, songs of remembrance, songs of students, and folk songs. These are songs that the Japanese would like to be sung for generations in a row and remain in the hearts of people over the centuries. Part of them is played in schools in order to assist in the training of students. Themes like the moon, the sea, the night, the four seasons, homeland, among many others, are sung not only by teachers, but also by parents and grandparents, helping to maintain the musical tradition in the homes of the country of the rising sun.

The option for the “Song”, as a musical genre, favored a differential: the use of melodies originally composed to be sung. The essence of the “Song” is in the alchemy necessary for the fusion between melody and text. Due to this union and technical factors, such as the small extension of the human vocal apparatus, for instance, the difference between the melody of a song and a melody composed for an instrument other than the voice is striking. Using this melodic differential, I tried, through the arrangements, to translate more directly and without the interference of the text the distinctive qualities of each song.

“Japanese compositions are relatively little known by our general public, and are more restricted to the environment of the Japanese community in the country.  Through this very particular reading, I hope I can contribute in some way to the dissemination and perpetuation of this splendid repertoire.”

6 – Kojo no Tsuki (B. Doir/R. Taki)
Moonlight over a Ruined Castle 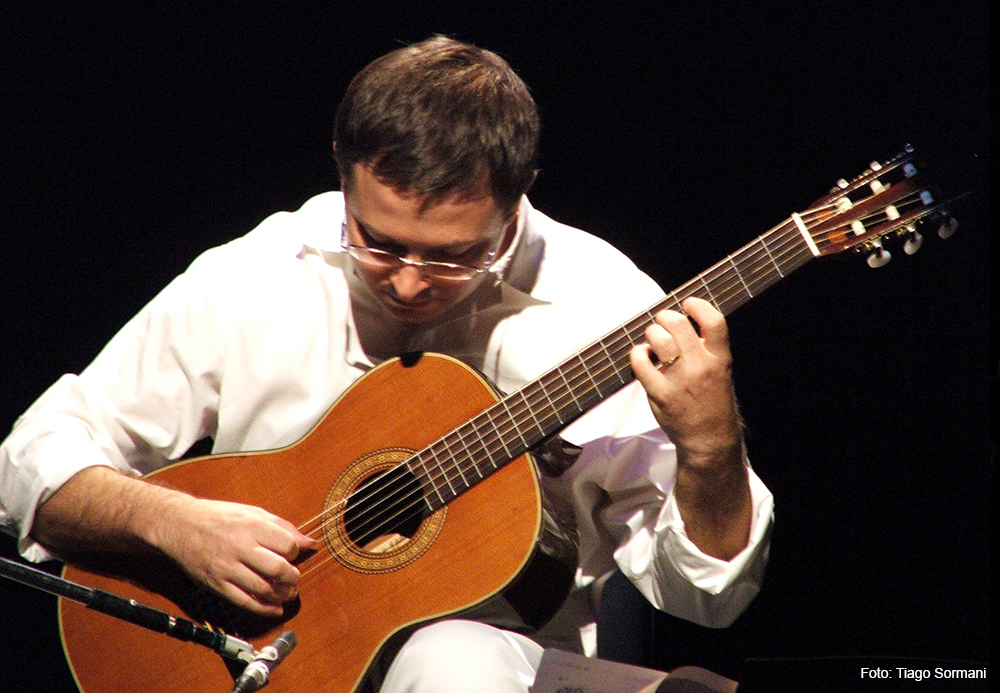 Watch Camilo Carrara‘s performance in the Music in the Castle project.