In this second concert of the Music in the Castle (Música no Castelo) project, produced by the Japan Foundation, teacher Tamie Kitahara will be interpreting classical repertoires of Japanese music with two very important instruments in the history of Japanese music, the koto, a horizontal Japanese harp or a large zither, and the shamisen.

The modern koto has thirteen strings, which can made of silk or nylon. The strings are tuned using movable frets, allowing the pitch to change while the music is being executed. 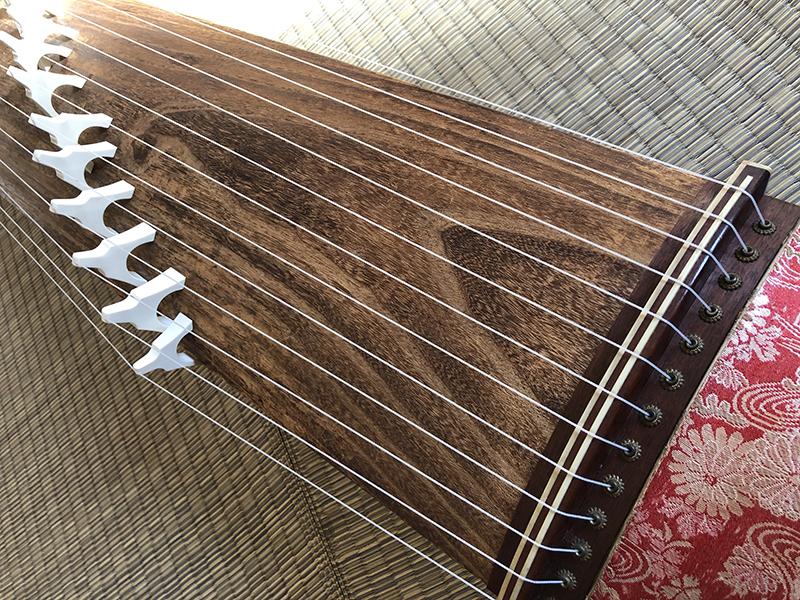 The body is formed by two Kiri boards (empress tree), of approximately 180 centimeters, forming a resonance box. There are variations in the instrument, such as the seventeen-string koto, invented by Michio Miyagi, responsible for the bass-line of the songs, and other models with twenty-one and eighty strings. Most people who play the koto are women, as its sound is soft and gentle, practically a sweeter sound. This does not mean that there are no men playing the instrument. 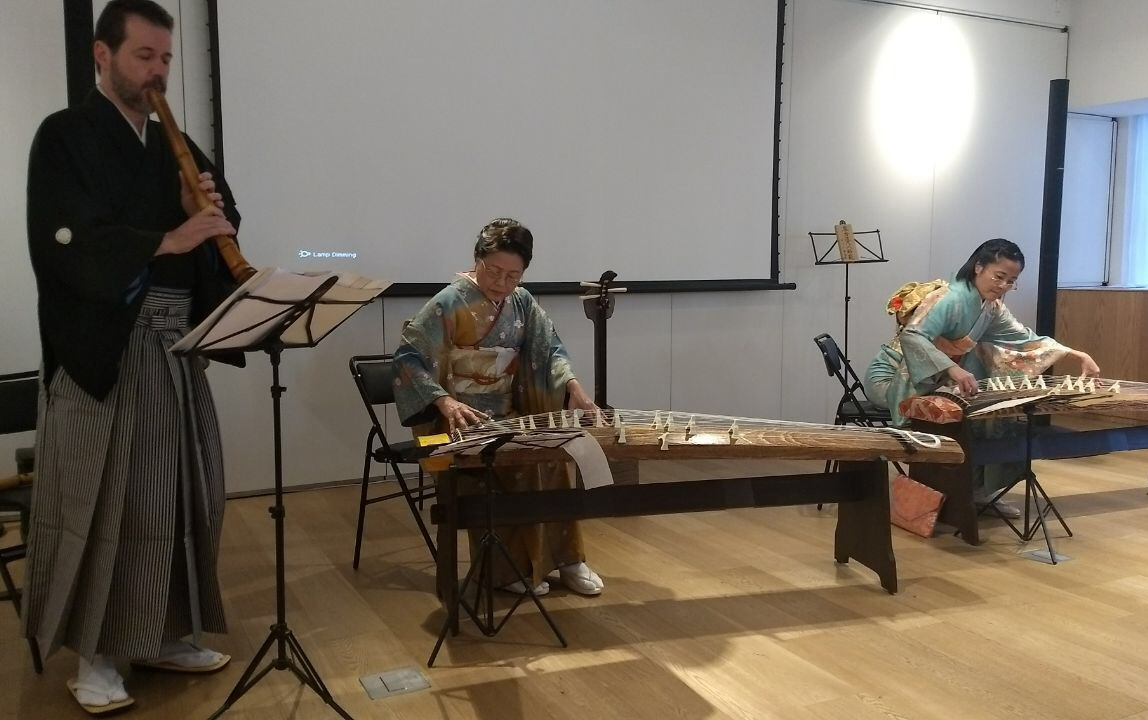 For centuries, koto music has been cherished by the nobility. In the 17th century, when the instrument’s popularity grew, Yatsuhashi Kengyo founded an independent style, the Yatsuhashi Ryu. In 1664, a book was written by Sosan Nakamura, Shichiku Shoshin Shu, containing the scores of the main songs by Yatsuhashi Kengyo, Rokudan no Shirabe, Hachidan no Shirabe and Midare, performed until today. Yatsuhashi created the tunings considered to be the most traditional for the koto: Hira and Kumoi. In that century, there was the instrument was also popularized as a dance accompaniment and as a group, formed together with the shakuhachi and sangen.

Today, there are two currents, Ikuta Ryu and Yamada Ryu. The Ikuta school was founded by Ikuta Kengyo (1656 – 1715) at the end of the 17th century, based on the adaptation for the koto of the existing formulas for shamisen (sangen), mainly in the alternation of songs with instruments originating from the Jiuta. The essential characteristic of this school is its emphasis on instrumental techniques.

At the end of the 18th century, the Yamada school emerged, founded by Yamada Kengyo (1757-1817). It was based on narratives, with more emphasis on songs. Although they have some pieces of the repertoire in common, the styles differ as to their orientation. Technically, the style of execution and the shape of the nail are different. The Ikuta style uses the nail with the rectangular shape, while the Yamada style adopts the oval shape, which causes the players to sit differently in relation to the instrument. The player from the Ikuta school sits at an oblique angle, while those from the Yamada school sit at a right angle. The position the hand touching the strings is also differente. The Ikuta school musician plays with their hand tilted in relation to the strings, while those from the Yamada school play with their hand in an upright position.

Teacher Tamie plays in the Ikuta Ryu style, from the Seiha school in Koto, Japan, from where she received the title of “Utahito” master.

The Shamisen, or samisem, is a Japanese musical instrument with three strings, whose resonance box has a top covered in cat or snake skin. It then took the place of the biwa (former Japanese balalaika) in narrative music given its more powerful sound. In the 16th century, composers for the instrument soon emerged, who then began to write the songs on sheet music. New fields for the instrument arose, such as the sankyoku (music for the koto, sangen and shakuhachi), joruri (music that accompanies the puppet theater – Bunraku), and songs to accompany the Kabuki theater. 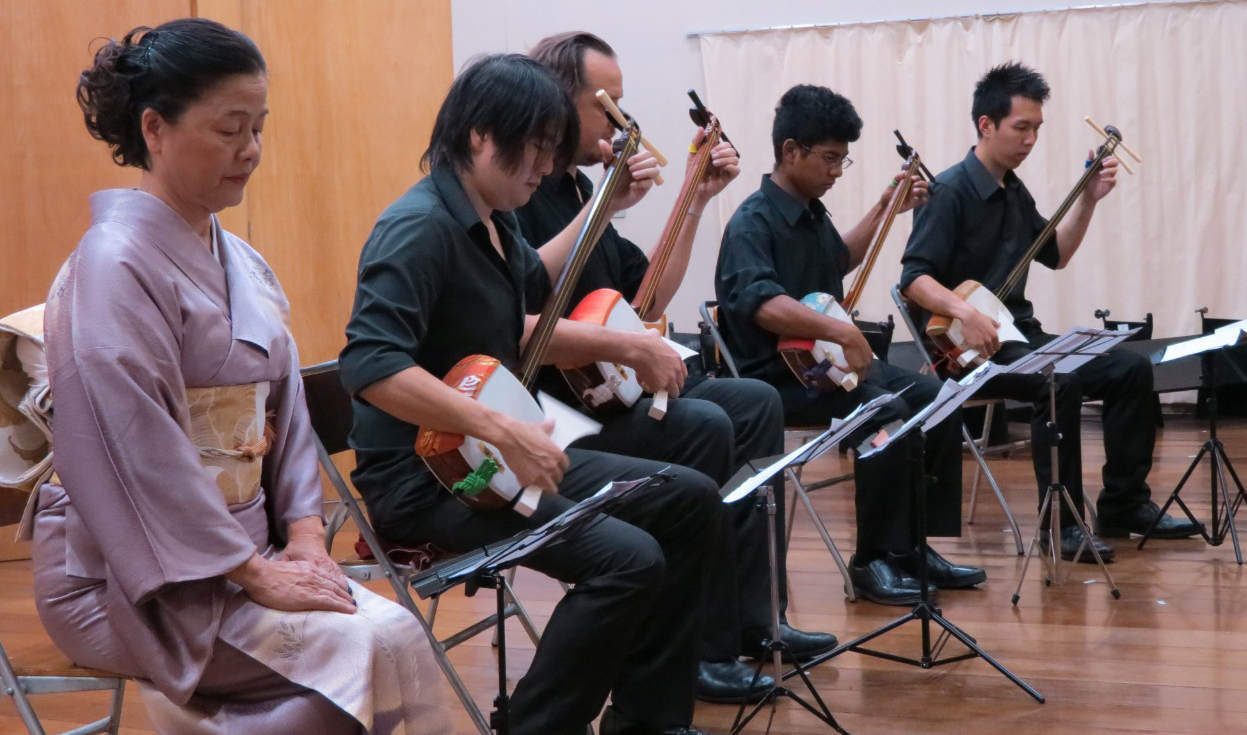 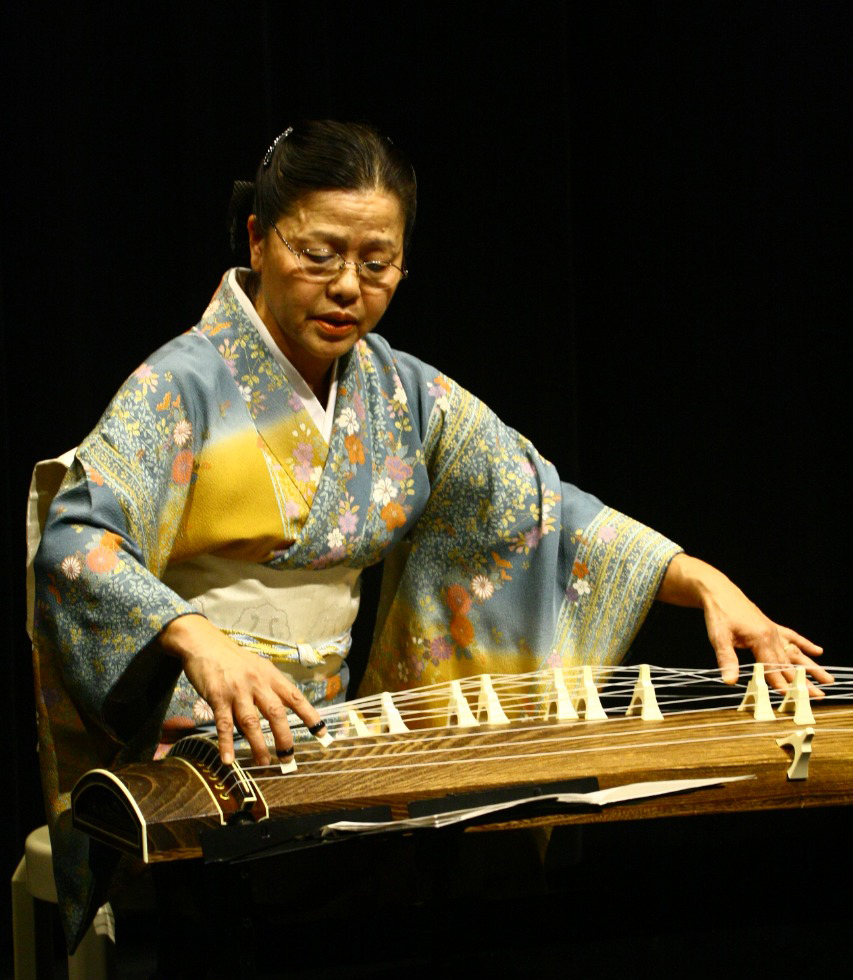 Teacher Tamie Kitahara was born in Japan in the province of Yamaguchi, in the city of Ube, and came to Brazil in 1955. During her childhood, she studied koto in the Ikuta-Ryu style. Since 1982, she has dedicated herself to the Ikuta-Seiha style and has been to Japan several times to perfect the techniques of the koto and shamisen instruments. In 1982, she won the Minyo Contest (Japanese folk music), singing at the Budokan gym in Tokyo. In 1996, she was approved in an improvement exam, becoming a master and receiving the stage name of Utahito, from the Ikuta Seiha school in Japan. Between 1995 and 2011, she was in Chile, Venezuela, Paraguay, and Bolivia at the invitation of the respective embassies, to perform traditional Japanese music. In 2003 and in 2013, she went to Japan to participate in the performances celebrating the 90th and 100th anniversary of the foundation of the Seiha School in Japan. In Brazil, she has performed with several renowned Brazilian musicians and artists, such as Camilo Carrara, Shen Ribeiro, Gabriel Levy, Ângela Nagai, Valéria Zaidan, Paulo Tatit, and with the Mawaca group. She is a representative of the Seiha Brasil group in Koto, formed by 30 members. Group performances are held annually to promote the Japanese culture. 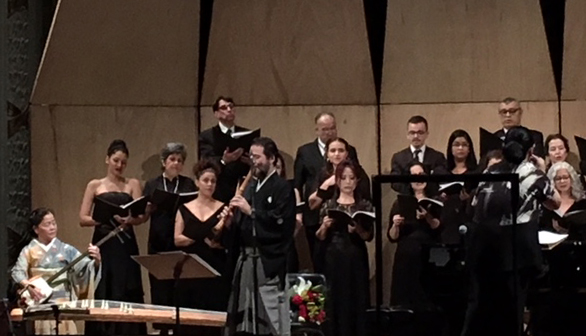 The first song is called “Rokudan” (6 steps or 6 movements), by Yatsuhashi Kengyo, one of the most important songs of the classical Japanese repertoire. It can be considered an initiation song, not only into the instrument itself, but also into the universe of Japanese classical music. The second, performed with the shamisen, is called “Gion kouta”, a traditional folk song from Gion, an important district of the city of Kyoto, where a traditional festival is held in the summer with large floats. It is a traditional place of the Maiko-san, the famous geishas of Kyoto. The third piece, also very important in the classical repertoire, is called “Chidori no Kyoku”, a composition by Yoshizawa Kengyo II for koto and voice. It can be translated as ‘the music of birds‘, with the birds in question being plovers.

Below is a free translation of this song:

Chidori no Kyoku – Song of Plovers

Watch Tamie Kitahara’s performance in the Music in the Castle project.