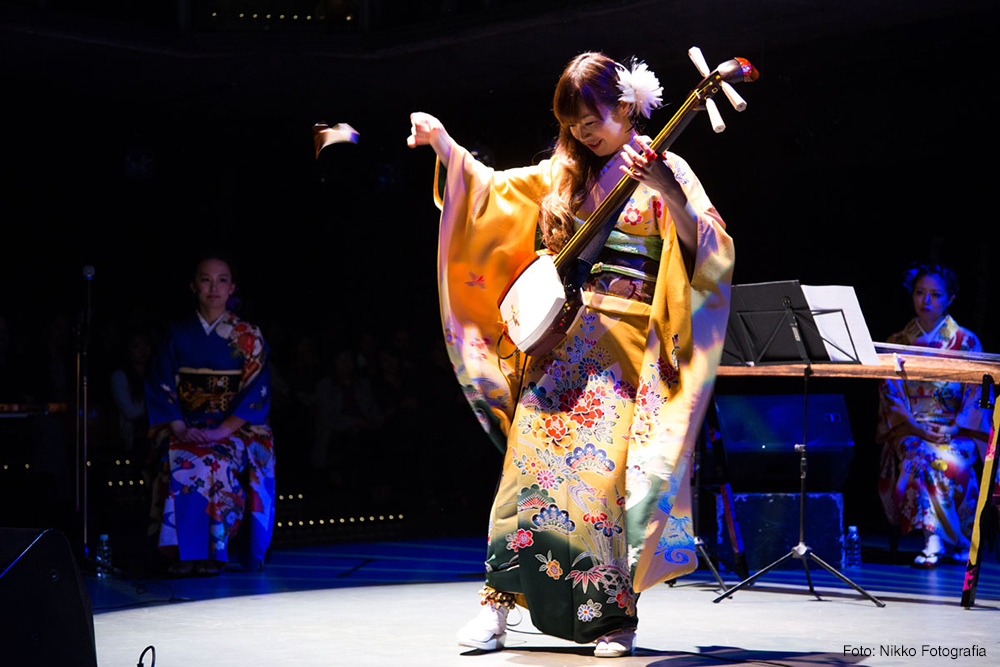 In this sixth program series of solo concerts named Music in the Castle (Música no Castelo), organized by the Japan Foundation, we will present the shamisen. The instrument will be performed by musician Chie Hanawa, in the Tsugaru shamisen style, which is different from that played by teacher Tamie Kitahara, in the second concert of this series.

During the Edo period, the peninsula was part of Hirosaki’s domain and was ruled by the Tsugaru clan. Historically one of the poorest and most remote areas of Japan, Tsugaru is best known as the birthplace of writer Osamu Dazai, who kept a journal about his travels across the peninsula and about the Tsugaru shamisen, a local instrument, different from other Japanese strings instruments. 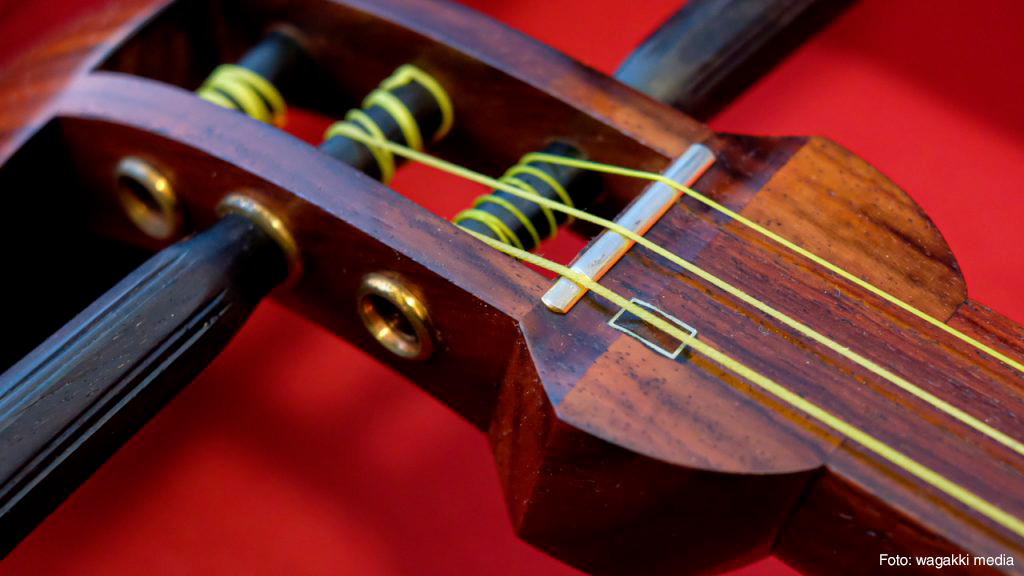 After Aizu’s defeat during the Boshin War (1868), many of the last samurai were sent to prisoner-of-war camps in the Tsugaru peninsula.

Although it is clear that the instrument originated in China, arriving in Okinawa in the 16th century A.D., the specific makers of the Tsugaru shamisen are not known with certainty, since written records of its construction have not been kept or formally recognized by the Japanese government.

What is known is that the Tsugaru shamisen originated from this small peninsula to the west of the current province of Aomori, called Tsugaru. Moreover, some researchers have developed their theory on the origins of the style based on the available evidence. There is some consensus that the style was developed by the homeless and the blind, known as bosama.

Scholar Daijō Kazuo affirms the style originated from a bosama called Nitabō, based on interviews with musicians and their families. According to his research, Nitabō acquired and modified a shamisen in 1877, for which he adopted a different style of playing. Nitabō also rounded the plectrum of the instrument to the shape of a rice paddle. In addition, he adopted a style of playing with the shamisen in an upright position, included the area around the easel as the playing area, and incorporated percussive strikes on the strings, in contrast to the exclusive use of the plectrum. However, other scholars argue that, given the lack of documentation, Kazuo’s account may not be entirely accurate. 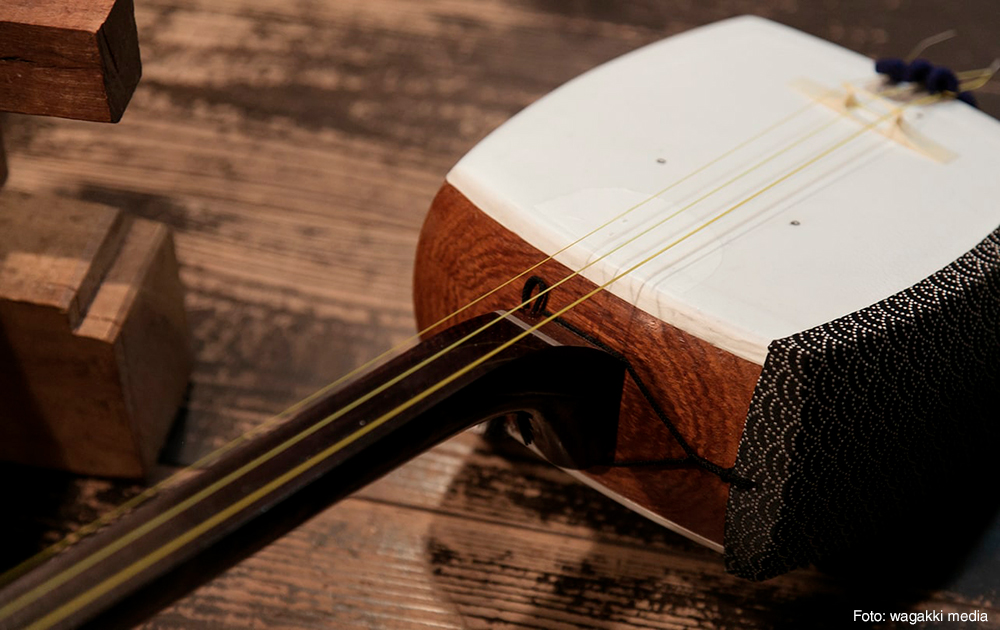 Nitabō had several blind students, such as Kinobo and Chōsakubo, who contributed to the development of the style. Nitabō’s last student, Shirakawa Gunpachirō, performed outside the Tsugaru region, as part of a group of folk performances. Gunpachirō also performed in professional settings, such as in concert halls in Tokyo. As a result of its success, the Tsugaru shamisen became popular in the 1920s, but its popularity declined with the start of the Second Sino-Japanese War in the late 1970s.

Between 1955 and 1965, many artists of the genre moved to urban centers in Japan, such as Tokyo. This migration was part of a larger movement, owing to the success of traditional arts in Japan. The Tsugaru shamisen enjoyed another period of success and popularity when Gunpachirō performed with enka (a Japanese folk music style) star Michiya Mihashi, at the Tokyo National Theater in 1959. Thanks to this massive exposure to the genre, young practitioners of the genre began to emerge.

Takahashi Chikuzan, also a bosama, a highly-regarded artist of the genre, started to travel across Japan in 1964. In February 2004, the film Nitaboh was released, depicting the history of this Tsugaru shamisen master, directed by Akio Nishizawa. 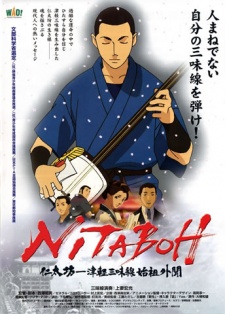 The Tsugaru shamisen is played in a larger shamisen, called futazao, with a thicker neck and strings than those used in most other styles. It is easy to recognize it due to its percussive feature: the pick striking the body of the instrument and the cadence of the rhythms performed.

This style of playing consists of many different phrases and styles. In acrobatic technique (kyokubiki), improvising is the main feature. The musician strikes the strings and the skin with the bachi (plectrum) with great force and speed using only the left index, the middle finger and the ring finger. The scale is basically pentatonic.

Another unique technique of the Tsugaru shamisen style in recent years is the tremolo, a type of vibrato played with the bachi’s back, without touching the skin.

Unlike most other Japanese songs, some Tsugaru shamisen pieces are in the ternary three-four time, although the three beats of the times are not accented in the manner of Western music, that is, they do not have the accent of a waltz, for instance.

Tsugaru shamisen’s repertoire is large and continually expanding. Interviews with notable artists, such as Takahashi Chikuzan and Yamada Chisato, and recordings made by stars of the past allow two forms of production. The song form, consisting of a vocal line with accompaniment of the shamisen and taiko, or as a solo piece of the shamisen. 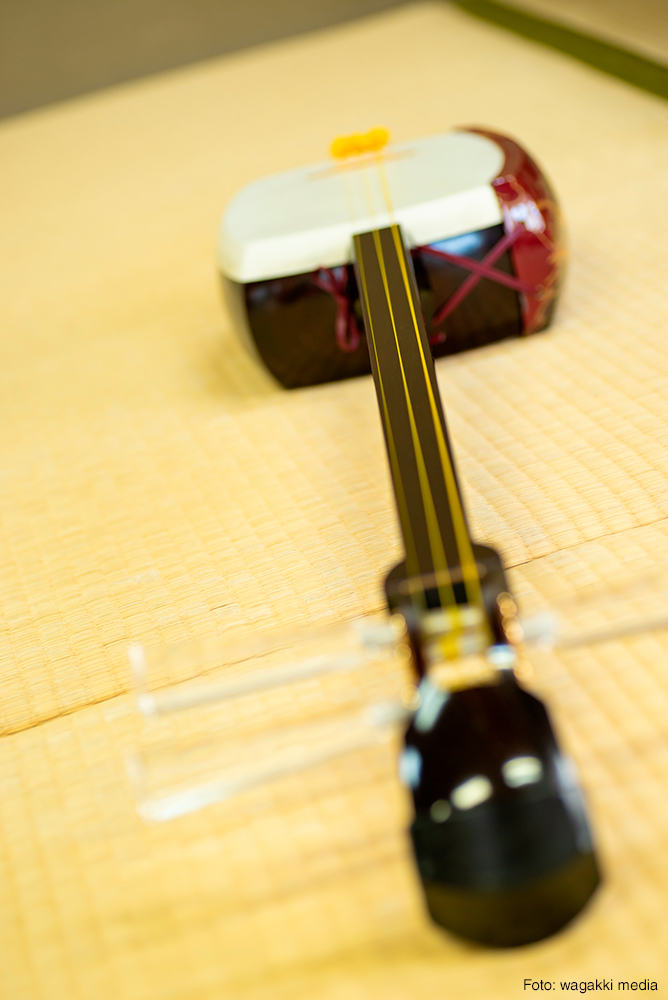 Recently, younger musicians have tried to combine styles or ways of playing the Tsugaru shamisen with jazz, rock, and other forms of more commercial music. With the exception of arrangements classified as shin min’yō (new folklore), these pieces are generally considered traditional or folk music. 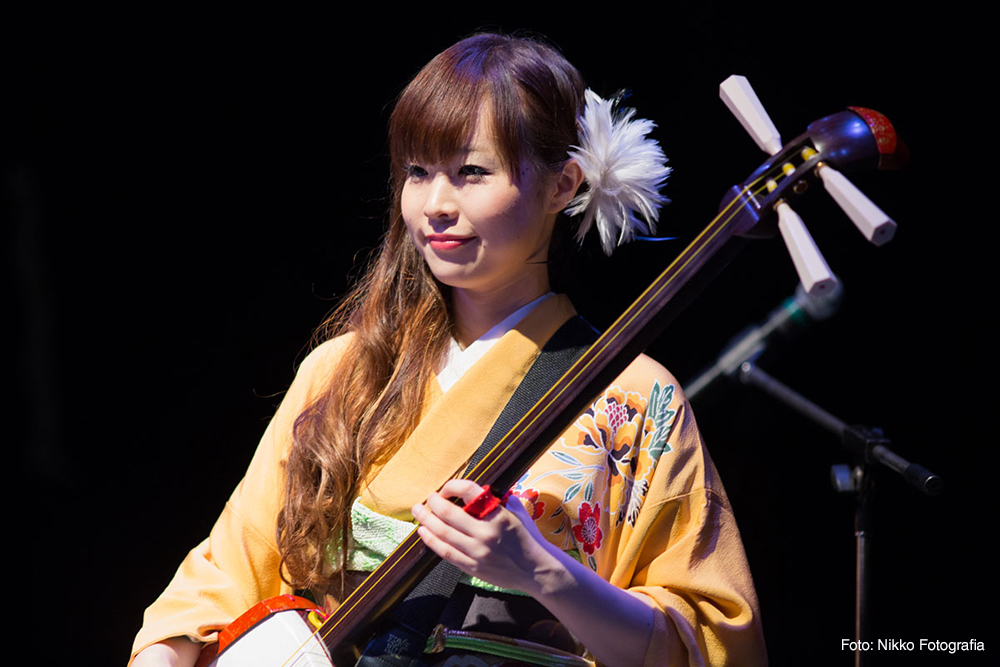 Born in the city of Hitachi, in the Ibaraki Province, at the age of 9 she started to learn how to play the Tsugaru shamisen with the master Mitsuyoshi Sasaki. In 2000, at the age of 17, she became the youngest player to win the Level-A award in the female category of the National Tsugaru Shamisen Contest.

In 2004, while graduating from the Traditional Japanese Music Course of the Music Department at Tokyo University of Fine Arts, she released her first album, Tsuki no Usagi (Moon Rabbit), by Nippon Columbia. From then on, she started to perform in concert venues in the region, initiating her solo and group career.

In addition to the trio YUI, she is part of the duo Hanamas, together with violinist Natsumi Okimasu.  Following the repercussion of her performance, she has performed at Tōkagakudō Concert Hall, at the Imperial Palace, and abroad, in countries such as Germany, Argentina, Belgium, Brunei, Chile, the United States, France, Georgia, Italy, Malaysia, the city of Hong Kong, among others. 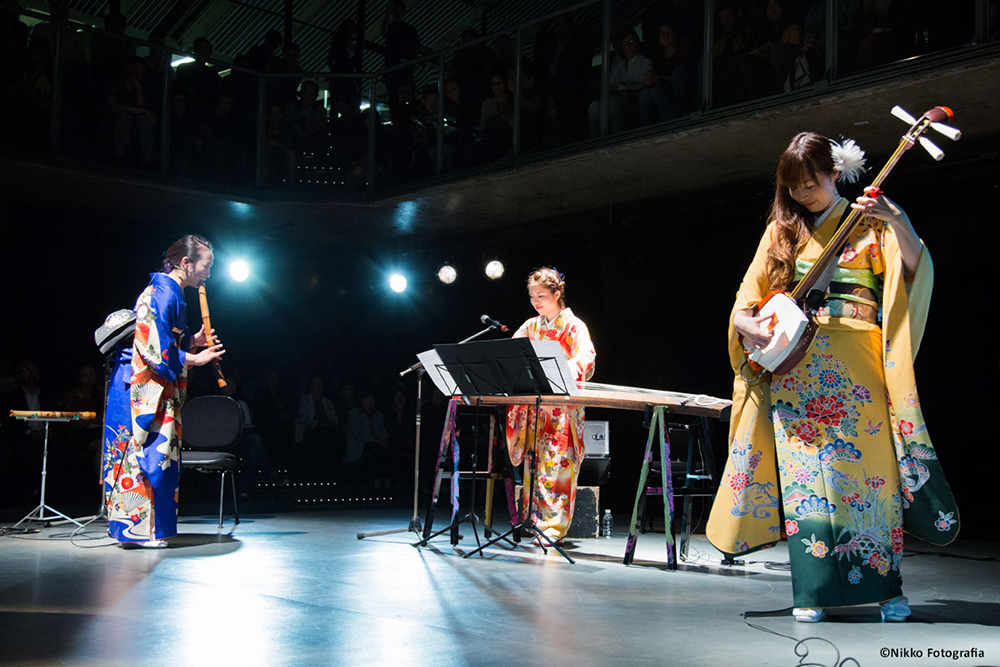 After being highly recognized in the universe of traditional Japanese music, also as a player of the Tsugaru shamisen, she then participated in TV commercials. In February 2014, she released her second album, CoLoRful, by King Records

Tsugaru-Yosare Bushi
We can consider this composition as a song to forget some desire. For example, when hungry and playing, the desire is to forget and keep playing without caring about the situation.

Tsugaru-Jongara Bushi
This is Tsugaru shamisen’s most famous folk song, an improvised version, like jazz. An insertion of a phrase from the song “Sakura Sakura”, with Chie’s original arrangement.

Akita-Nikata Bushi
This is Akita Prefecture’s folk song, with a paced and continuous sense of rhythm.

Experience
Chie’s composition for SONY TV commercial “Xperia”, which she recorded and participated as an actress. The idea was to fuse traditional with innovation. 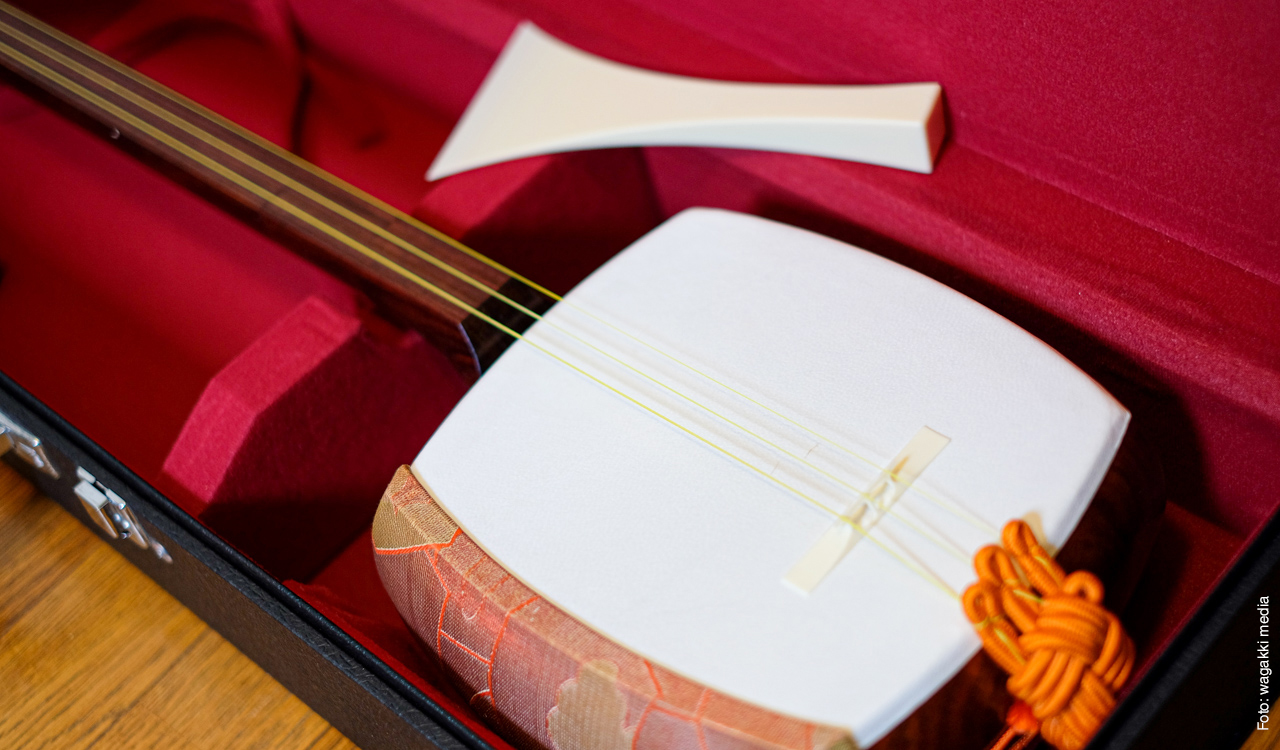 Watch Chie Hanawa’s performance in the Music in the Castle project.